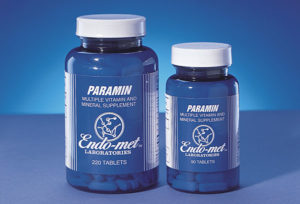 Glandular nutritional products, also referred to as protomorphogens, have been used for years to help balance body chemistry and rebuild health. Many people ask what glandular products are, how they are made and why they are recommended?

Most brands of glandular products are freeze-dried tablets or capsules containing defatted organs, glands or other tissues from bovine or porcine sources. There are several other processes to produce glandulars. They can be formed with a salt extraction process or prepared in a homeopathic form. A few companies use neonatal glands - glands from very young animals. Endo-met Laboratories uses freeze-dried glandulars.

How are Glandulars Manufactured?

In the freeze-dried method, the raw material is collected from animals inspected before and after death in government-inspected facilities. Some come from the United States, but the material is often imported as well.

The material is shipped to the laboratory in a frozen form. There it is first ground in a meat grinder. It is laid on stainless steel trays and stored in a freezer until it is hard frozen. The trays are then loaded into a freeze dryer. This device creates a vacuum and applies low heat to remove most the water from the product.

In 2-3 days, the water content is reduced to less than 6%. The freeze-dried product is then defatted and ground to a fine powder. Several batches may be blended to produce the final product. This is statistically sampled for any chemical or bacterial contamination before it is released for sale.

Why are Glandulars Recommended?

Two thousand years ago, the great physician Hippocrates stated (and I paraphrase), "If a person has a weak liver, give liver. For weak kidneys, give kidney". The principle was known long ago that giving the organ or gland from another animal can strengthen and support the function of that organ in the human. Using animal glands for healing is part of many medical systems worldwide.

Homeopathy employs a similar principle that is termed "like cures like". In modern times, studies were conducted using radioactively tagged glandular products. It was found that ingesting an animal tissue, such as liver or kidney, results in the tissue's migration to the target organ. The radioactive dye concentrated in the same organ in the human as the ingested gland or organ.

Exactly how glandular products work is not absolutely clear. Perhaps they provide nucleoproteins that nourish the target organ. Or there may be a vibrational resonance or similar phenomenon that helps to rebuild and regenerate the target tissue. Perhaps other mechanisms are also at work.In practice, we know that the glandular products may be very helpful to assist the functioning and regeneration of the body.

Q: How long should one take a glandular product?
A: Glandulars are safe and may be taken for an extended period of time. Some people need them for only a short while, while others may need them for years.

Q: Do glandulars 'turn off' the natural production of hormones by a person's own glands?
A: Taking hormones such as insulin, estrogen or progesterone may inhibit the body's natural hormone production.

Q: Is it true that only New Zealand glandulars should be used?
A: All Endo-met glandulars come from inspected animals. Glandulars from Argentina or New Zealand do not guarantee they are better quality than others.

Q: What about homeopathic glandulars?
A: Homeopathic (very low dose potentized) glandulars are sold in some stores. In our experience, the freeze-dried products often work better than the homeopathics.