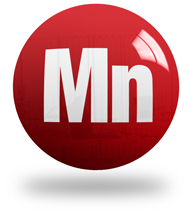 Manganese is called the maternal mineral because manganese-deficient animals cease to care for their young.